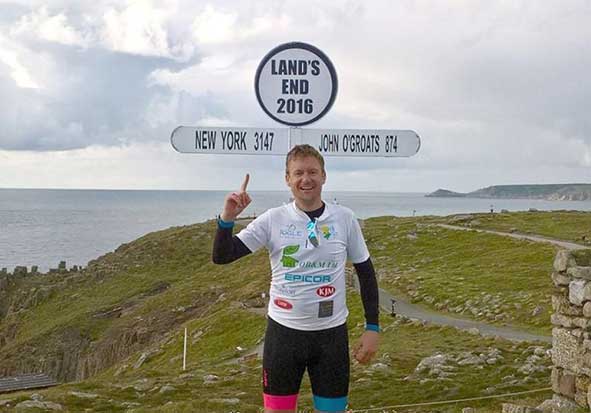 Around this time last year, Mark Dolby was sitting in my garden at a small gathering of our families having a Barbecue and enjoying the World Cup. Having finally got him to sit still for about five minutes (which is a task in itself and maybe a sponsored event too far for him), he suddenly sat bolt upright exclaiming,

Although none of us were actually planning on moving anywhere fast, simply enjoying the conversation, he grabbed his phone and busied himself looking up information as we all looked at him quizzically.

And then; about a minute later; he started to talk… Very, very fast and excitedly.

The Twin Towns Tour was born.

As well as making it happen, this is not Mark’s only challenge this year, following on from his London Marathon exploits and Firewalk to name a couple. But, let him tell you more in his words below.

Anyone who knows Mark, knows that he is a human dynamo, probably generating more natural power than the wind turbine in Green Park. You’ll also know that he wears his heart very much on his sleeve and that he has a heart the size of Hampshire. The sort of guy, you would be very proud to say is your friend. I know I am.

So, why on earth would I want to run a marathon and then cycle to Germany just a couple of months later in the same year?

14 years ago this year my Mum – my fantastic, beautiful Mum – lost her eight-year battle against cancer. You have never met anyone braver – she loved life and wanted to live it to the fullest. My Dad would say that Mum wouldn’t want to see what was at the top of the hill, she wanted to see what was on the other side.

The last thing my Mum saw was my 2-day old daughter Poppy and she smiled and said she was beautiful.I’ll take that.

It took a long time to recover from Mum being taken away at just 58 years old, but little did we know that ten years later in the very same room that my she had passed away, my Dad would be joining her.

Dad went downhill very quickly and within a matter of weeks was gone. The only way I can describe him is that he was my hero.Even writing this now is hard.Friday 13th November, the same day as the terrorist attacks in Paris, Dad passed away in his sleep and went to join Mum. A pretty bad day, I think you’ll agree.

There is nothing like the love between a parent and a child. One hug from Mum and everything would be alright. To have a drink with your Dad and listen to the banter with your friends, can never be taken away.

Since Mum passed away, I was determined to do all I can to try and change the world and most of all stop Cancer from taking away more of our loved ones. Unfortunately, I haven’t had a great deal of success so far!

I jumped out of a plane at 12,000 feet and may have been a bit sick on the way down. I think I scarred the tandem parachutist for life! I shaved my head with the unstoppable Mr & Mrs Killick but ended up scaring the life out of my kids when they thought someone had snuck into Mummy’s bed in the morning! I’ve run half marathons and marathons and even done a Firewalk.

I expect to be far more successful this time (well, here’s to hoping anyway!) Thank you, as always, for all of your support. We couldn’t do this without you.

You can sponsor Mark online here.

Meanwhile, we've just nudged past the £34k mark for
@camrose_centre from our Bath and Back ride earlier this month.

A big thank you to Naomi the Community Champion at @Morrisons Basingstoke who regularly contributes food packs to Camrose, that have been purchased by customers at the store. So a huge thank you to Morrison's customers for your regular and continued support!

Big shout to @savills for their donation to @DebbieMclatch for our ride. That's more money for @camrose_centre 🙌