Pedalling For A Second Year… 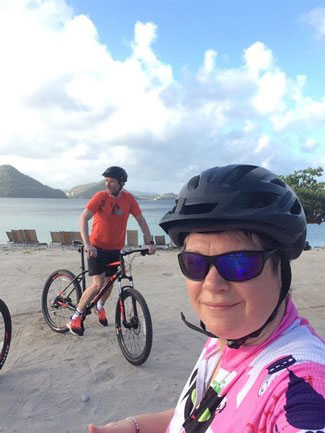 I first experienced the perils of cancer aged 10 when a school friend of mine died from it. I later experienced my best friend die of a brain tumour at the age of 28, seeing her two young children touch her coffin was heartbreaking.

Since then, I have experienced both positive and terminal outcomes. More latterly, my father has successfully overcome prostate cancer and remains in remission; my cousin, sadly, lost his battle.

I have supported the Ark Cancer Centre for many years through my business, Rotary connections and promoted the Jane Austen bench trail. I bought a bench myself and this remains on public display.

Two years ago I helped see the Ark Riders off from Basingstoke and then met them in Paris as they reached the Arc to help celebrate their success.

I was so inspired by this group that I promised I would join them and last year, I bought a bike and learnt to ride it on the Bournemouth Beano ride.

It falsely persuaded me that I might be a rider and so I have misguidedly signed up for the Twin Tours. As we are going through the towns that are twinned with Basingstoke & Deane Borough Council, my employee, I hope to raise the awareness of this fine charity abroad.

You can support Debbie with her fundraising online here.

Earlier this summer @arkriders fundraiser Mark Copeland decided to visit his brother in Margate 130 miles away. Rather than taking the car, Mark set off at 4am on his bike and in doing so raised an amazing £1275 in sponsorship for Camrose. What an amazing effort thank you Mark!👏

Do you remember when you joined Twitter? I do! #MyTwitterAnniversary

Not a moment too soon, @Laughterhse is coming back to Apollo Hotel in September.

If you fancy a laugh (and don't we all) you can buy your tickets now. Find out more:

Mark (Dave) did it. On Saturday, he cycled from Basingstoke to Margate - around 130-miles in a day. His fundraising for @camrose_centre is also up to £1285! #basingstoke #community #arkriders https://www.justgiving.com/crowdfunding/mark-copeland-1